In pulling together the copy for the website and brochure Scotland's West Coast Golf Links you get immersed in a whole host of facts and figures, thoughts and opinions on the Open Championships that have graced Ayrshire's coastline. Prestwick's first in 1860; it's last in 1925. Turnberry and the famous Nicklaus and Watson Duel in '77 or Norman's victory in '86. For Troon there are obvious memories of Gene Saracen holing in one at The Postage Stamp, Norman's drive into sand at the last in the play off in '89 or Palmer's victory in 1962.

But the thing about an Open's memories are they are all so personal, they're about where you were at particular times not about what you saw via the BBC.

I remember following Norman at Turnberry in the third round in quite possibly the worst rain I've ever been on a course in; I watched Sandy Lyle at Troon in '89 (he was out of the running and out early) until the 17th tee then heard a roar for Norman's first birdie of his final round and changed allegiances and followed one of the most spectacular closing rounds of golf ever.

I had just sat down with my kids at the 5th at Troon's last Open when Tiger holed for birdie from the front right bunker. Kids just thought it was magic!

My own personal highlight though has to be Troon 1982 - just about to head off to college in Edinburgh and still a junior member at Barassie. The practice rounds were taking place at the course before Final Qualifying and I'd just missed getting a bag for Ed Snead which I thought might have produced a big tip! Anyway, I was introduced to this guy and off we headed to the practice ground - the guy was an amateur from Birmingham, Chris Poxon who I soon found out was brother of the Ryder Cup player Martin. I think if I'm being honest I was a little disappointed that I hadn't got a big American to caddy for but that was soon to change.

The Qualifying those days was 36 holes over the weekend before the Open finishing on the Sunday afternoon with a fair number of places up for grabs at each of Barassie, Western Gailes, Glasgow Gailes and I think Irvine Bogside. So first round was early morning Saturday as I recall and this guy just went like a rocket from the beginning. Bag weighed a ton - quite possibly weighed down by maybe 200 cigarettes!! - but Chris started superbly well and I think was three or four under after the first six holes, just burning it up. I'm pretty certain that he matched the course record that day - 64 or 65 something like that - but was certainly leader overnight.

Sunday's start is a bit hazy but it was clear that the pressure of being in the front was taking its toll. Par - Bogey - Par - Bogey replaced the par-birdie pattern of day one and lead to it becoming quite clear that by the time we walked off fourteen that things were looking grim.

Now this is the part that sounds apochyryphal but isn't, I clearly remember Chris, cigarettte in mouth, turning to me and asking what we needed to qualify! It was a little more in jest than perhaps Tiger may do but the question was asked and deserved an answer.

Now eighteen's just about the same length as its predecessor so clubbing was okay and position off the tee as I recall was the problem. Can't truly remember where Chris was coming in from for his second but remember clearly where it ended and that was in the gentle hollow to the front right of the green which really wasn't ideal for a pin placed towards the middle right.

Anyway, you know by now where that ball was going to go. Yes pin out, ball starts rolling, up and in. All the way, never a doubt. Never a single question that he was going to finish 3-3-3-3 and qualify by a single stroke for The Open Championship at Royal Troon...

What was much more unexpected given that he was now surrounded by family and members from his club in the Midlands was when he came out having signed his card that he shook my hand, smiled and said, "We're going to The Open!".

So my memory of the 1982 Open Championship was as a caddy! As a teenager, the uniqueness of the experience did not dawn on me fully until later years but it was an experience never to be forgotten. Practice rounds with his brother and Woosy, par fives with fairways measuring less than five yards wide, new golf bag, clothing, gloves, balls by the box load, practicing beside Seve. Okay I was experiencing all this vicariously but I had a yellow bib and a pass for being a caddy and I was inside the ropes - and I could help myself to as many cans of Schweppes from the coolers on the tee as I could possibly carry!

In the end we were restricted to 36 holes, didn't make the weekend -don't think we broke eighty - but he did sink a sixty foot putt on sixteen I think it was. May have been for a double bogey but that didn't really matter - it got an enormous cheer and I was holding the pin!!

So thank you Chris Poxon, wherever you may be. It may have been Tom Watson who lifted the Claret Jug once more but 1982 was my Open!

Email ThisBlogThis!Share to TwitterShare to FacebookShare to Pinterest
0 comments 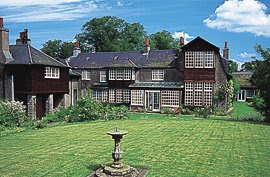 The beauty of working in the Scottish hospitality industry is visiting places and properties on a daily basis as part of your work. It throws up gems of the highest quality and never fails to amaze with what is actually dotted about our country - and accessible.

A meeting this morning highlighted this once again. A round table to discussion a website development for a group of Wolsey Lodge owners in the South of Scotland was scheduled for Skirling House near Biggar. If being honest the thought of a cross country drive taking up several hours of the day wasn't the most appealing but leaving Ayrshire, avoiding the traffic of early morning and arriving in Biggar for 10am changed my outlook!

My first experience of Biggar was in my Queen Margaret College days - very much pre-organised Edinburgh Hogmanay! - when one New Year's Eve we commandeered the college minibus (seats for six but accomodating at least twelve!) and headed for Biggar. I think only one of the group new what was ahead but the massive annual bonfire and village celebrations kept it in my mind for many Hogmanays thereafter.

Anyway today's meeting was in Skirling a place that quite possibly goes unnoticed for most travelling the road from Abington Services on the M74 to Edinburgh but quite delightful place. Skirling House sits overlooking the village green and nowadays offers a wonderful five star guest House experience for visitors to this part of the Scottish Borders.

Parts of the building date back to the 16th century and the Florentine drawing room ceiling and unique iron work at the ‘Arts & Crafts’ Skirling House are reminders of the first owner, art connoisseur Lord Carmichael.

Having been there for a meeting and having sampled Bob's finest Colombian coffee and freshly made soup I am pretty sure that the next time I return will be for a wee break. Only 45 minutes from Edinburgh, an hour from Glasgow; and one hour fifteen from home in Ayrshire. All we need to do now is convince Bob that he will spread the message even faster with an online booking engine!

Email ThisBlogThis!Share to TwitterShare to FacebookShare to Pinterest
0 comments 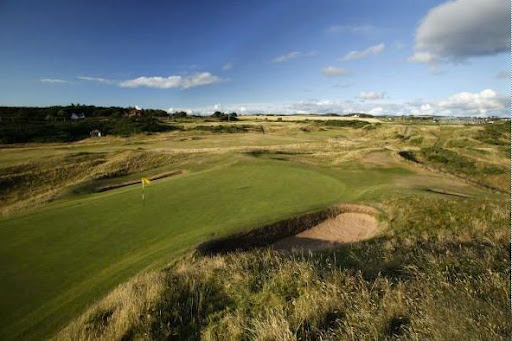 The Committee of Royal Troon Golf Club has become aware of the need to extend the availability of golf over the Old Course, and provide a wider choice of options for visitors.

Accordingly, single rounds over the Old Course will be offered during the 2009 season from April to October 2009. In addition, visitors will be able to play golf on Sunday afternoons with four tee-times being made available.A day ticket will continue to be available, with or without lunch, for one round over the Old Course and one round over the Portland Course. Naturally, catering will be available for those visitors who do not wish to book lunch.

The Committee hope that this additional availability will enable more golfers to enjoy the “Royal Troon Experience”. If you require any further information, please do not hesitate to contact our Caddiemaster, Peter Mackie, at bookings@royaltroon.com
Email ThisBlogThis!Share to TwitterShare to FacebookShare to Pinterest
0 comments

Welcome to the blog of Scotland's West Coast Golf Links!
When we list the golf clubs involved in this new business development initiative it can fair take the breathe away....
Three Open Championship venues - Prestwick, Royal Troon and Turnberrry's Ailsa Course.
Seven Open Chmapionship Final Qualifying Courses - Irvine Bogside, Western Gailes, Glasgow Gailes, Dundonald Links, Barassie, Prestwick St Nicholas and Turnberry's Kintyre.
All links courses and practically joined together, easily accessible and open for play.
Together we believe they make Ayrshire one of the world's great golfing destinations and in coming together with accommodation providers, travel operators, restaurants and some of Scotland's finest heritage attractions, you will find a whole host of new reasons for bringing the golf bag to Ayrshire.
This introduction is written beneath an economic shadow which casts a level of darkness across the whole of the economy. It is however co-incidental. It is neither the reason for this blog nor the rationale behind this new initiative.
Scotland's West Coast Golf Links is neither borne out of economic fear nor a need to be radically different. Instead it is a postive statement about all that is good about Scotland - The Home of Golf, all that is great about the history of links golf in Ayrshire and an understanding, an acceptance that the ten golf courses have a combined impact on the economy of Ayrshire that has not always been recognised.
Scotland's West Coast Golf Links have set themselves up as an assocaition with the common aims of improving the golf experience for the visitor and promoting the holistic nature of the west coast golf product - it's transport links, it's wonderful range of accommodation, its attractions, its 19th Hole!
Email ThisBlogThis!Share to TwitterShare to FacebookShare to Pinterest
0 comments 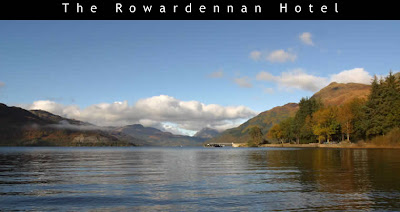 Rowardennan Hotel relaunched their website today having integrated the Claymore Project Content Management System. The Claymore Project, a tourism focused database, allows the Hotel to update the content on any page of the website at any time. The CMS integrates seamlessly into the existing website design, which was originally produced by another developer, providing a low cost but valuable upgrade to the Rowardennan online presence.

Key Benefits:
As part of the change The Edge were also contracted to provide their website hosting and domain name management services.

Rowardennan Hotel relaunched their website today having integrated the Claymore Project Content Management System. The Claymore Project, a tourism focused database, allows the Hotel to update the content on any page of the website at any time. The CMS integrates seamlessly into the existing website design, which was originally produced by another developer, providing a low cost but valuable upgrade to the Rowardennan online presence.

Key Benefits:
As part of the change The Edge were also contracted to provide their website hosting and domain name management services.