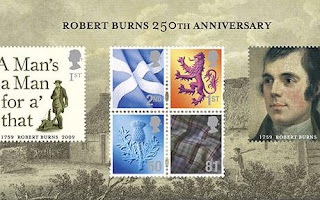 Robert Burns will become the first person outside of the Royal Family to be celebrated with three collections of stamps when a new edition is unveiled this week.

The Royal Mail is to issue the new collection, featuring two stamps with Burns designs and four with a Scottish theme, to mark the 250th anniversary of the poet's birth.

The head of special stamps at Royal Mail said that despite his early death aged 27, Burns' poetry has secured him a place in history and continued that they were delighted to celebrate the 250th anniversary of the birth with this special commemorative sheet.

The two first class stamps will be published on Thursday, one featuring a portrait of the bard and another bearing the words of one of his most famous songs, A Man's A Man For A' That.

The other four stamps feature a saltire, a thistle, a lion rampant and a tartan cloth. A Robert Burns commemorative £2 coin, produced in association with the Royal Mint, will also be on sale.

The poet was previously celebrated with stamp issues in 1966 and 1996, the latter to commemorate the 200th anniversary of his death.

There are a host of events taking place throughout Scotland to mark the birth under the banner of Homecoming 2009 celebrations 2009.

Ian McCaig organiser of a series of Scottish Golf events has welcomed the publication of the stamp. "We'll buy in sheets of them to make sure that we have enough to send out in all our Homecoming Golf Classics 2009 mailshots! Every little bit helps!"