We picked up on Google Alerts that Turnberry Resort has appointed a new general manager which in turn meant that Stewart Selbie had moved on. I worked with Stewart on and off for over a decade it must be, sitting on Tourist Boards and working on various projects. Stewart worked with us (with considerable patience!) when we were trying very hard to get the Ayrshire Golf Classic established and also on other key initiatives such as the Open Qualifier Card and his understanding of the importance of Turnberry to the role of Ayrshire's tourism product was clear. 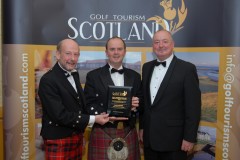 Perhaps the changes of ownership made this more difficult at times to turn into action but Stewart always remained open to ideas and supporting not only Ayrshire but Scottish Golf playing a prominent role in the goings on at Golf Tourism Scotland and playing host on a couple of occasions to the annual awards dinner.

Apparently, Stewart who left Turnberry in May to join the Westin Dubai Mina Seyahi Beach Resort & Marina as complex general manager and we wish him the very best in his new role.

In the meantime, The Luxury Collection Hotels & Resorts has appointed Jordi Tarrida as general manager of the Turnberry Resort, Scotland. Tarrida will report to Starwood Hotels & Resorts senior vice president Michael Wale. His remit will be to manage the 150-room Ayrshire property, which has three golf courses and he joins from the Arabella Golf and Spa Resort in Mallorca.