East Kilbride based Olympia Skating Club are this week celebrating the launch of a brand new website. The club approached The Edge in September with a view to giving the club an on-line profile and as part of our ongoing support for youth sport and development we were delighted to help with a discounted proposal for the club's committee.

The result appears to be a positive outcome for the club who were delighted with their new on-line presence. The site is powered by The Edge's content management system The Claymore Project and allows the club's organisers the ability to update their own news, events, images and even picture galleries. They can also embed YouTube video footage as well. 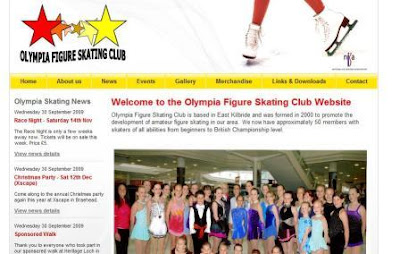 The site completes a trilogy of sites The Edge have done in the past month for youth sports clubs in Scotland having redesigned the website for Young Killie and a new site for Kilmaurs Thistle youth football club.
Email ThisBlogThis!Share to TwitterShare to FacebookShare to Pinterest