How time flies, eh? It's now been two years this weekend since The Edge hit front page headlines in the newspapers with our Loch Lomond Children in Need Campaign and we thought it was as good time a time as any to reflect on the experience.

They all have a place but sometimes it's projects and clients that explain things better than we ever can. And to some extent that's just what our "Sing Loch Lomond for Children in Need" campaign did a couple of years back.

The project, even for us, was a big bit of out of the box creative thinking, lots of project management, developing strong and mutually beneficial partnerships, having focussed objectives and targets, strong design, effective web presence, positive e-marketing, good strong copy writing. When they all come together - and they can come together - it describes our business and our thinking and ethos better than any number of words could.

So when you secure front page Daily Record, double page spread and editorial, BBC Scotland coverage, live broadcast from a Scotland international, 500% increase in web traffic, enquiries for website advertising opportunities and a major jump in e-commerce sales through the website and a UK Top Ten record for Runrig and The Tartan Army then perhaps we should be reminding our clients that this is indeed what we can do!

The project from start to finish was great to be involved with. Simply pitching the idea to Runrig of recording a new version of Loch Lomond was the first hurdle and it was with some considerable fortune that Steve Cullen, Runrig's manager saw the potential just as much as we did. BBC Scotland were next and likewise the opportunities of a fantastic campaign tied in with the Tartan Army's final match against Italy hit the net in style! 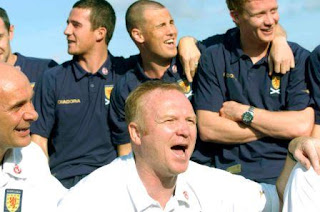 So we now had the lead artists, the full support of BBC Scotland. All we needed to do was convince the SFA that we could mic up Hampden and record 52,000 Scottish football fans at half time! Easy? Well actually it was and Colin Banks pulled out all the stops to make that part no problem either. He even allowed us to record the squad singing the track at Cameron House on Loch Lomond.

The Edge even produced a karaoke version of the track for the big screens at Hampden to ensure the crowd sang in time!

After that it was a rush job to get the single remixed which Runrig looked after at their Danish studios while we designed the CD and promotioanal artwork for the campaign including a Loch Lomond downloads page.
The Daily Record loved the concept and for the whole period of the campaign supported the whole thing from start to finish. Front page features were followed by double page spreads and artist interviews and readers competitions making sure the entire nation knew what was going on. 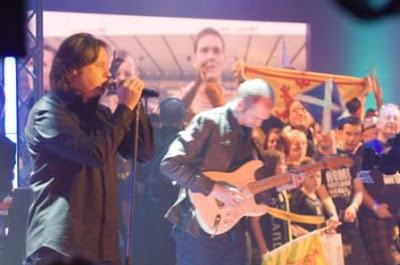 The highlight for all involved however was an unforgettable Children in Need night at the BBC Studios in Glasgow. The Edge had been asked to get three hundred Tartan Army to the studios on the night for a live rendition with Runrig; not a problem given that it was the evening before Scotland's biggest Hampden occasion in years and if you were one of that group it will live long in the memory from the march along the Clyde from the Renfrew Ferry into the studios and the most amazing piece of live television which even now raises hairs on the back of the neck watching  it.

The ending however was as usual the same. Scotland failed to qualify against Italy and the Euro Dream was over; even an early morning phone call from the record company on the Sunday morning with the amazing news that the song had charted at number nine in the UK charts couldn't lift that cloud! It must be said however that listening to Fearne and Reggie introduce Runrig and The Tartan Army was pretty cool!
Anyway, it's always worth having a look at that video all over again - it's had more than half a million views on YouTube - and if you wish buy the track on iTunes!

It was an achievement and a half and showed what collaboration can achieve. Thanks for the memories again to Steve and Runrig, Colin and the SFA, Donald and Grigor at BBC Scotland, Alex McLeish and the Scotland Squad, The Daily Record, Nigel at Active Media and of course the wonderful Tartan Army!