Another Good Year Ahead for Ski Industry? 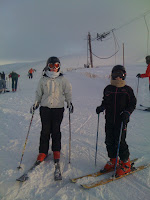 "Thousands of snowsports enthusiasts took to the slopes over Christmas and New Year, providing a seasonal boost to the Scottish economy.
About 15,000 skiers and snowboarders visited the five ski areas – Cairn Gorm, Glenshee, the Nevis Range, the Lecht and Glencoe – over the past two weeks. A total of 77,000 have enjoyed the slopes since the season began in November – one of the earliest starts for several years.
The figures have been welcomed after last season, the best for nearly 15 years, generated more than £37million for the economy."

Read the full article at The Press and Journal

It's absolutely great news for so many businesses - large and small - around the main ski areas that the snow is back at least for now! Only downside to the article is again the regurgitation of all of these multiplier factors and economic impacts that are clearly now just dropped in as a matter of course into every press release issued by the Scottish Government or VisitScotland. This time the figure is that for every £1 spent on the slopes there is another £4 contributed to the local economy. We're thinking that we'll make a database of Scottish Tourism statistics for 201...