Growth in hotel bookings on mobile shows opportunites for hotels

Bookassist CEO Dr Des O'Mahony shares some data on hotel booking performance on mobile platforms, showing the clear and growing opportunities in the area and some surprises in the user patterns.

Bookassist launched its mobile web app solution for hotels in late 2009 (bookassist.org/mobile) and more than 150 hotels and hotel groups are now using the solution. We thought we'd share some of the results we are seeing with usage on mobile, both mobile access of regular hotel websites and mobile web app usage.

Trends in our data to date strongly indicate that city hotels perform far stronger on mobile than those outside cities, in terms of traffic and in terms of conversion of that traffic to bookings. Also, the lead-in time for bookings on mobile has proved to be very short, with more than 65% of all mobile bookings we track being for within 24 hours of arrival. The necessity of having last-minute availability on mobile is clear for city hotels given this trend.

While city hotels are performing much better on mobile, it is clear from our data that other hotels are also showing mobile business growth, though with a time lag compared to the city properties. We expect to see growth continue in all sectors on mobile, which represents a very real opportunity for hotels in the coming months and years, especially with industry figures showing over 100 million smart devices now being sold per quarter through 2011.

Figure 1 shows an example of a small European city hotel group and the evolving mobile business it has seen through 2010 and on to today (the figures have been rounded for clarity but are otherwise accurate). During 2010, the hotel group did not operate a mobile-optimised web solution up to end July 2010, but adopted our mobile solution from the start of August 2010 onwards.

The growth in traffic during the first half of 2010 (blue graph) is attributable to the general mobile traffic growth trend in society based on the explosive sale of smart devices in the last number of years. The standard website that this hotel group used was bookable on mobile, but was not especially optimized for it, and recorded a relatively poor conversion of 1.1% to 1.24% across the six month period.

We introduced the webapp solution and saw an immediate change in conversion from mobile devices from 1.24% to 2.31% in the weeks prior to and after the launch, a clear vindication of optimized mobile strategy. The hotel group also indicated the availability of a mobile optimized solution on its online and offline marketing, helping increase the general mobile visitor growth trend from that time onwards (blue graph). Mobile advertising was also initiated, though its impact compared to the general mobile traffic growth trend is hard to quantify. Critically, the conversion continued to grow to finish the year at an impressive 2.91% conversion across all mobile platforms. 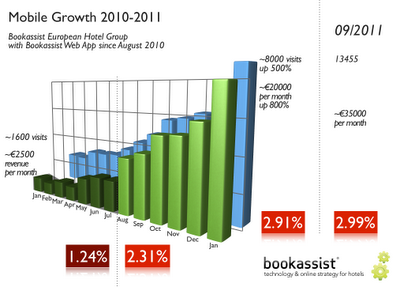 More importantly, the combination of capitalizing on traffic growth and an optimized webapp to drive conversion has had a very significant revenue impact. Bookings revenue from pre to post webapp time periods has risen from about €2,500 per month for the group to over €20,000 booking revenue per month in 2010 (green graph). This now represents a significant percentage of the group's online revenue and by the third quarter of 2011 had reached €35,000 in monthly revenue, with a conversion creeping up to 2.99%, a very welcome conversion rate for any hotel on any platform.

Overall for clients with this profile, we are seeing up to 5% of online revenue now attributable to mobile devices in 2011, from basically zero at the start of 2010.

Market figures for device sales currently show that about 50% of smart devices sold are Android-based. Despite this, only 15% of our figures show traffic from Android devices (see Figure 2). This trend is reflected in general web access data that tends to show Apple's iOS devices taking up to 80% of all online mobile traffic. It appears that since the Apple iOS devices are more of a premium product, their users are more committed users and more internet-savvy, while many Android phones are being supplied by telecom operators as their standard phones, even to users who have no interest in internet access. While our webapp is optimized for both iOS and Android, it is vital that iOS is optimized for in the first case since it represents the largest market right now. 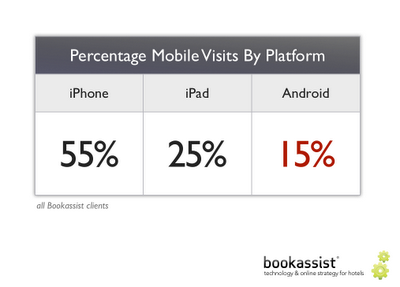 When we look at conversion figures, below, an extremely interesting picture emerges. Android users are converting way below the average, at less than 0.8%. iPhone users convert more than three times better at 2.5%, while iPad users convert at a whopping 8 times their Android cousins, at 6.5%. The iPad conversion in particular is strongly surprising and again reflects the attitude of the iPad use to internet usage and engagement. It is clearly vital that hotels consider targeting this platform preferentially and ensure their websites are optimized for it. 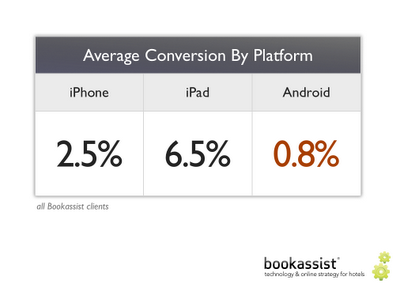 Mobile is a very real opportunity. Volume is growing, conversion can often be higher than regular web access and is definitely higher when optimized mobile solutions are deployed. iPad stands out as a clear opportunity and with the rate of sales of iPads and their dominance among travelers, it is clearly a target platform above all others. Short term booking is dominating and last minute availability on mobile is critical for successful conversion.

Dr Des O'Mahony is CEO and Founder of Bookassist, the technology and online strategy partner for hotels with offices in Dublin, Madrid, Paris, Rome, Vienna and Prague.

For further information on getting your hotel on a mobile version contact Bookassist Scotland on 01292 521404
Email ThisBlogThis!Share to TwitterShare to FacebookShare to Pinterest
Labels: bookassist mobile app, mobile phone accommodation conversion