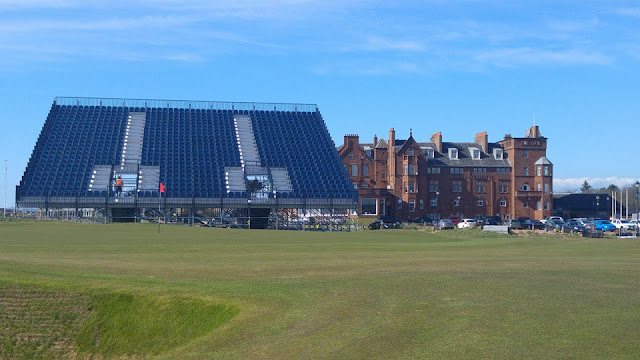 Whilst we can't allow for the specifics of global activities that disrupts our sector we can, indeed must, as professional businesses plan for things going wrong before they happen. This may be off the scale in previous measurement charts but the travel and tourism sector has had serious issues to contend with over the past two decades that resulted in radical change, loss of businesses and realignment of the sector.

The problem is that we don't seem to have the ability to learn and not repeat mistakes.

I recall the morning of 9/11 clearly as I was sitting in Edinburgh in a meeting with the new Chief Executive of VisitScotland about golf tourism and representation and growth of the sector. I came out of that meeting with Malcolm Roughead, with no knowledge of what had been happening whilst we talked and the diametric position of everything having changed but the content of the meeting being more relevant than ever.

The outcome eventually led to the creation of Golf Tourism Scotland, an industry wide body that was set up to communicate with and represent the diverse interest of a sector that encompasses courses, accommodation, ground travel, travel agents and tour operators. An industry that had suffered post 9/11 but was moving into a very fast cycle of capital investment in new product at the top end but a sense of crisis was emerging in golf courses at the second level with supply greatly outweighing projected demand.

GTS was about developing new standards, involvement with new technology, raising the profile of the sector. It was involved with working on deals for the sector around the Ryder Cup and intrinsically involved in trying to create a permanent centrally funded public/private golf structure that would be there to develop the sector through good times and (it was very clearly understood and stated) the future bad times.

Roll forward to the planning for a post crisis landscape and what do we have?

We have in a single week, communications from two different newly set up "golf groups" seeking to influence strategic thinking about the way forward for golf tourism in Scotland.

If I wasn't older and wiser it would break my heart.

Good luck to these groups in achieving their aims but the real truth of the matter is that while everything was good for Scottish golf tourism, the industry saw no need to develop a structure for a sector that was performing so well and generating so much revenue for the country and the clubs. Advance tee time bookings were on a rolling basis looking good for "next year and we've got another Open Championship the year after. Why would we spend our time supporting a golf tourism body?" Not a real quote perhaps but a reflective sentiment.

The idea of being ready for future crises was one of the reasons for the conception of GTS; it was mentioned many times that the industry needed a strong and permanent voice to see it through the good and the bad. The industry didn't agree; focus was lost, activity dropped off, membership of the organisation fell away, public sector moved on. It had been allowed to become irrelevant to too many

Golf Tourism Scotland was wound up some three or four years ago and ironically the last board was made up by some, perhaps many, of the very people who are now populating the new groups. I appreciate the vagaries of hindsight but nevertheless the confident assertions that GTS had achieved its objectives seemed hollow even then.

So twenty years on from the meeting of the Scottish Incoming Golf Tour Operators that identified the clear and immediate need for the development of a wider body and a clearer public private partnership to develop golf tourism we now have three groups all pursuing similar statements of intent.

Who knows what the outcome will be but you'd guess that Malcolm Roughead may have a strong sense of deja vu when he gets a request to meet with a group of businesses asking how we can all work together to improve Scotland's golf tourism sector. Working together is the key and the two new groups should be getting in touch with the (albeit flawed) Golf Steering Group and developing from there. If the real objective is getting golf tourism in Scotland back on track, empowering what is established will be a lot quicker and more effective than starting something new.

The lack of real structure across the whole of Scottish tourism will come under serious scrutiny and perhaps strain over the coming months and years. Golf Tourism Scotland is perhaps but a microcosm of areas, regions and sectors across Scotland. Some may be better prepared than others for the speedy implementation of joint strategies you fear however that too many areas are not.

Joined up thinking is not something as a tourism sector we have yet cracked. We need to rethink not only the published strategy for the next ten years but the structures and communications that are needed to deliver that vision.