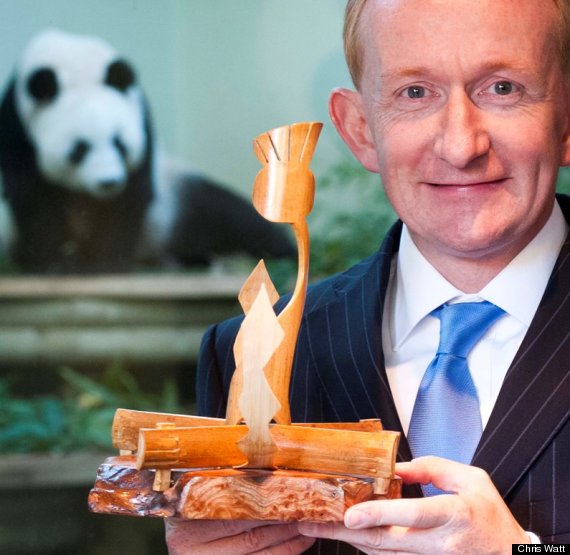 "Mr. Chair, we've got a wonderful promotional opportunity for you sir." say the richly rewarded external PR consultants down the telephone line to Leith.

"It involves you handing over a special achievement award to the pandas."

Pregnant pause at the other end.

"Yes sir a special achievement award sir. Those pandas have worked their asses off for Scottish tourism since they arrived last year and we wanted to give them an OBE but apparently that's not going to be possible. So we've decided to give them a Scottish Thistle Award."

"No sir, I can assure that the Chinese Embassy have not been pressing us constantly for the past three  months for an award."

"Yes we did consider Mr Trump. The Golden Comb award had the wind taken out of its sails by Bute House"

"Undermining the value of the awards? I'm not sure what you mean, sir. No-one deserves this tourism Oscar more than this international couple do and we've designed a special award made from bamboo which gives us a fantastic title for the press release."

Yes sir, I did say "Bamboo’ll do Nicely."

"We've written a great quote for you too sir. We think it's just the sort of thing you'd say on your own.

Mike Cantlay, VisitScotland Chairman said: “Since Tian Tian and Yang Guang’s arrival last year, they have put one of Scotland’s best-known visitor attractions on the world map and shown excellence in tourism, which is what the Scottish Thistle Awards are all about - so it’s only right that we came here to honour their achievements.”

"Yes sir, that's right sir. Giving animals awards is indeed what the Scottish Thistle Awards are all about - just look at some of the previous winners sir."

"And we've got a great outro too which will promote the awards ceremony. "Despite their dedication to tourism and suitable black and white attire, Tian Tian and Yang Guang are not expected to appear at the gala dinner and awards ceremony in Glasgow. Zoo keepers at the Edinburgh visitor attraction assured the national tourism organisation that the pair would indeed be there in spirit."

Hint of a distant and resigned sigh from the other end of the phone.

"Thank you sir, we'll draft it up straight away."

They smile knowingly and pick up the phone to the Chief Executive...
Email ThisBlogThis!Share to TwitterShare to FacebookShare to Pinterest
Labels: edinburgh zoo pandas, press and pr visitscotland